A Roadmaster for Every Area in Cork with John Tobin 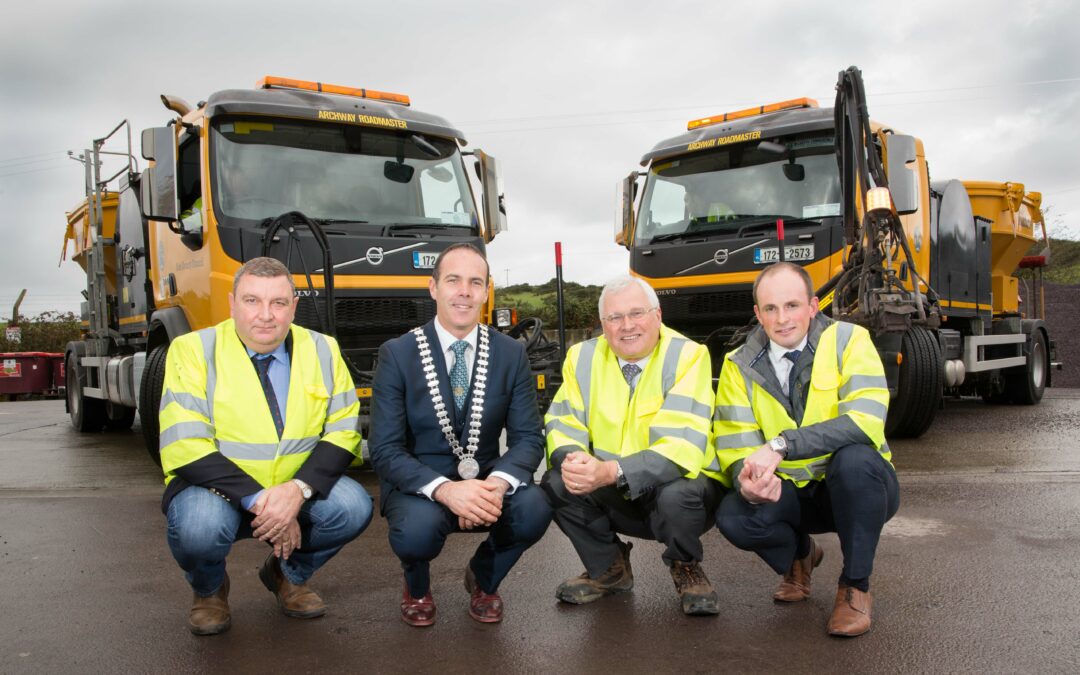 “And for me, the big benefits of the Roadmaster are the quality of workmanship, it is exceptional. You don’t have to go back over those defects again. It will clean out the ground. It will spray it; you can mix the aggregate to your exact specifications. You can roll it afterwards and brush it. All of this and it’s a one-man operation! But more than anything else, if you are using it correctly, the job is done properly, you’re fixing the pothole, or you’re patching bare ground to a very high quality. You will not have to go back to it for six to 12 months at worst. With traditional methods you would be out every 6 weeks.”

In Cork County Council there are three machinery yards, one in Victoria Cross, one in Mallow and in one in Skibbereen. They own a fleet of more than 600 vehicles throughout the county. Currently this includes an impressive 17 Archway Roadmaster patchers. There are six engineering areas, covered by each of the three machinery yards. According to John “Owning 17 Roadmaster velocity patchers means we almost have a machine to cover nearly every area all the time”. The Skibbereen machinery yard services mainly rural locations but also regional roads, and busier county roads.“

John explained in the past, they used lance patchers on 18 tonne trucks. The driver was up front, the boiler in the back, and the chips were behind it. A man would be shoveling out the chips and spreading with a lance. John found this method wasn’t very effective. His colleagues in North Cork were the first to get a Roadmaster patcher in 2007. John tells us he started in Skibbereen in late 2010. “Getting a Roadmaster was one of the first things I worked on. Since then, we’ve built that up to a fleet of 6 operating out of Skibbereen machinery yard. We got our sixth Roadmaster in 2018. The reason we went down that route; it was driven by the fleet. We looked at what we had at the time and saw that moving forward buying more lance patchers wasn’t a good investment”. John explains that they needed to be more progressive and move away from simply fixing potholes on a temporary basis to focusing on maintaining the road, fixing all kinds of defects; edge breaks, cracking etc. John says “We needed to make the investment in a Roadmaster, cost was the big obstacle, but I knew there were savings to be made using it. Straightaway there is a labour saving as you’re losing the men off the back. In some cases, that’s two or three men who are available to do other work”.

John and the Cork County Council team are proud of their focus on increasing productivity and John takes time to explain to us how they used the Roadmaster to help them achieve higher levels of productivity. John tells us “You are also increasing your output significantly every day. We’ve driven this whole concept of emptying the hopper daily. If you are talking about an 18-tonne truck you are dropping 7 tonnes of chips in a day. A 26-tonne truck you can use up to10-tonnes a day. We aim to come back with an empty hopper, to maximise our productivity. Overall, our output everyday has increased significantly. We no longer fix an individual pothole and very rarely are our fixes on a temporary basis. We now work long term repairs and preventative road maintenance. Using the Roadmaster this way we get huge value out of every machine and on every road.”

What is even more important than the productivity levels to John, is the quality of workmanship. He told us “It is way better. Often what happened when we used the lance patcher, water and debris in the hole wasn’t being swept out. Bitumen was being poured into it and it was being filled up with chips. It was just messy. It wasn’t a good job. The Roadmaster does the clear out, so there is no mess, the repair lasts and it looks far better.”

Making a business case for the Roadmaster

Implementing change can be difficult and over a decade ago when John and the Cork County Council team began to work with Roadmasters, there was some sceptics. Training provided onsite by Archway was the key to overcoming this. In John’s words “We trained everyone we could, from senior management to our Operators. The training was a game changer! We went from people not wanting to see a Roadmaster to fighting to be the one driving it! That’s why we have constant demand for our fleet now. Everyone understands that it doesn’t just fill the hole, it works on a range of road issues and the fix lasts.”.

The training successfully changed attitudes. Cork County Council Management in partnership with Archway were able to show what the Roadmaster could do when used properly, and how to use it properly. John said “Our team could clearly see the benefits of working with a Roadmaster. After that making a business case for the Roadmaster to the areas was very easy. Price comparisons with a lance patcher were no longer valid. Even if you just considered the extra support vehicles and extra loading trips that were needed to work in the old-fashioned manner. I was able to produce figures that showed that traditional methods were more expensive than investing in a Roadmaster”.

“The bitumen is the biggest and most visible cost, but we were comparing apples with pears. The training made the team understand that this cost grew directly in line with productivity. After that it was an easy win to move everyone who had been resisting the Roadmaster to looking for access to one. We had strong backing from senior management, Director of Services, Tom Stritch and Senior Engineer John Donegan, they were instrumental in ensuring we went from 1 to six Roadmasters, in six years!”.

Demand for the Roadmaster is still high within the Skibbereen and greater Cork region. They have now set up several local depots in outlying areas and base a Roadmaster at each. This gives the council a couple of clever carbon reducing wins. The large capacity of the Roadmaster removes the need to make extra journeys to refill. The local depots yards are used to fill, and the Operator can make it out on the road early in the day. They can stay out all day working without having to refill. This increases their productivity, but it also stops them having to make extra journeys, so they burn less fuel and reduce their carbon emissions.

John tells us they were happy to see the auxiliary / donkey engine being removed from the new Roadmaster model as an additional carbon reducing measure. This change lowers the fuel demand by about 30%, in addition to increasing the load capacity and it requires less maintenance. It has made the amount of work they can do on a single journey even bigger. “These may sound like small savings, but we do them every day, across the fleet. It is only on a very wet day that the Roadmaster stays in.”

Cork County Council service their own machines, John tells us “The Archway team are exceptionally good to help, providing specialist fitter training and parts quickly when needed. We could send the machines to the Archway factory in Carrick on Shannon for servicing, but we can’t let them go for long! They are in use all the time! So much so, that we have 3 more Roadmasters on order for the county!” John plans to use his new arrival to replace his oldest machines from 2012. He will keep the the older machine in operation but will be used as additional patcher and as a cover machine. John says “I consider the older machines as bought and paid for, yet they are still in use and in demand. I plan to hold machines for 15 years. To do that we look after them, we watch for a wet day and bring them in every six weeks. We turn the pipes which ensures we only have to replace them every six months.”

The longstanding relationship between Cork County Council and Archway Roadmaster is a testament to the councils’ commitment to maintaining their road network and to the quality of the service and product offered by Archway Products. Local authorities have proven to be early adopters of innovative indigenous technologies. This foresight has created a growth platform for companies like Archway Products who have successfully expanded into the UK market and are now proactively entering European markets with the help of Enterprise Ireland.

This website uses cookies to improve your experience while you navigate through the website. Out of these cookies, the cookies that are categorized as necessary are stored on your browser as they are essential for the working of basic functionalities of the website. We also use third-party cookies that help us analyze and understand how you use this website. These cookies will be stored in your browser only with your consent. You also have the option to opt-out of these cookies. But opting out of some of these cookies may have an effect on your browsing experience.
Necessary Always Enabled
Necessary cookies are absolutely essential for the website to function properly. This category only includes cookies that ensures basic functionalities and security features of the website. These cookies do not store any personal information.
Non-necessary
Any cookies that may not be particularly necessary for the website to function and is used specifically to collect user personal data via analytics, ads, other embedded contents are termed as non-necessary cookies. It is mandatory to procure user consent prior to running these cookies on your website.
SAVE & ACCEPT